Iseldom speak of the days when I spoke with a French accent and travelled everywhere on a vintage train. Friends and family considered the accent an affectation, and the mode of transport an unnecessary expense, but they didn’t have my vision, or a stalker called Trevor.

Trevor was peculiar in that he wasn’t really interested in me, he simply liked to stand behind me before sniffing my neck. Shame really, because he was an attractive man, just not that great at conversation. With or without a French accent.

I always enjoyed my excursions on the vintage train, I found it relaxing to be buffered by the rhythms of the railway, safe in the knowledge that Trevor was left far behind on some godawful commuter train just outside of Paddington. Or so I liked to think.

It was April 2001, I had taken the night train from Southend to Clacton and I remember it being unseasonably warm. I was struggling to sleep and had thrown off the complimentary candlewick bedspread; I tossed and turned and I recall being overly concerned that my deodorant was failing. I was never one to be easily spooked, but I could feel a presence outside my door. I knew it wasn’t Cyril the conductor because he had already seen my passport and he would now be otherwise engaged maintaining the Corby trouser press; playing with his banjo; or discussing the finer points of piston lubrication with the driver, Jim. I got out of my cot, threw open the cabin door, but there was nobody in the light flickered corridor.

I arrived in Clacton 10 hours later, exhausted from my trauma and slightly demented. I ran from Clacton railway station [notable for having two waiting rooms, refreshment facilities, and a payphone] towards the sea, I then headed in a south-westerly direction, which took me up Clacton High Street. Still feeling uneasy I returned to the sea where, to ease my torment, I jumped on a fishing boat to take few snapshots of a passing frigate. I realised my torment had risen to a new low when I flicked through my pictures only to be confronted by the image of Trevor staring back at me. I was aghast, yet thankfully I managed to maintain the appearance of expressionless calm. After changing into a black onesie from Dorothy Perkins I returned to Clacton railway station and stood in the middle of the concourse, and sure enough, within minutes I felt the hair from Trevor’s nostrils tickling the nape of my neck as he took a loud nosey snort.

And so I stopped speaking with a French accent and I stopped travelling everywhere on a vintage train. Friends and family were relieved. I saved money. And the last time I saw Trevor? He was doing something nasal related on Big Brother for Channel no. 5. 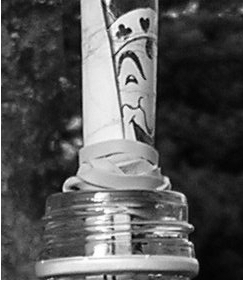