Between us, Jon and I have cobbled together a new meme, it is called ‘A Decade Ago’ or #adecadeago, which is exactly the same as ‘A Decade Ago’, but without spaces, and has a fancy hashtag slapped in front of it. To take part all you have to do is shimmy through your blog to 2009 and see what you were doing 10 years ago. For example, I was doing this: X-Rated. Yes, I was taking part in a meme!! I was collecting letters, talking about my favourite things, and waxing lyrical about udders, or some such. Mr XL’s comment summed it up best when he said: It’s like a bad Scrabble hand that you’ve made a triple score with, or something.…

In the spirit of favourite things, I have decided that my 2019 is going to be all about FAVOURITE THINGS, and recycling, I know! Hot topic! And I am going to do my part by recycling old blog comments, and bits of old blog. For example, in response to my comment box HERE, I have made this:-

It is called: Repeating Patterns 149, and is made from scraps of paper from my studio; a vintage book; and as previous described, old blog comments. It amuses me that I can take what was originally digital and turn it into something with a vintage aesthetic. And I love making these.
So, from the top…. 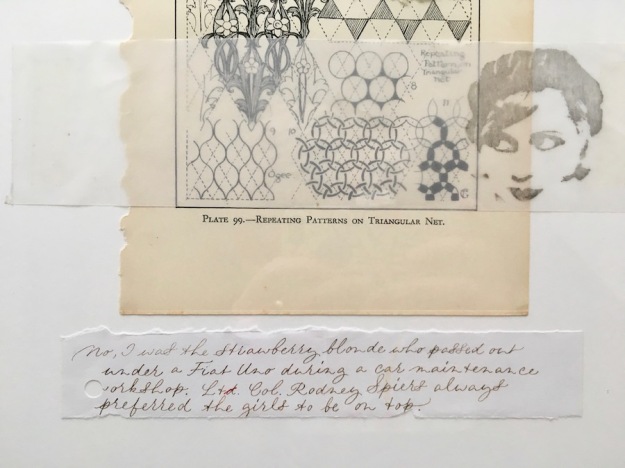 Many thanks to Mr Modo, in the guise of Mrs Westicott, for the comments! He is long gone from the blogs, but now he has been immortalised.

It might be your turn next, if you’ve ever left a comment on any of my blogs…

I have been tagged to do a meme, and, as is my way, I have decided to do it immediately – granted I have postponed it for nearly a month… but this is as close to ‘immediately’ that I could get. Thank you Mr Nikos for tagging me!!

Okay…. this is complicated….I have to give four answers to four questions, which are:-

I am a cheap date.

Not that cheap a date.

PLACES I HAVE BEEN:-

If anyone would like to join me in some Fourplay then please feel free to do so. And, because it is THAT time of year, I will finish with a tune….

Dr. Clive Mutterfort DGM, MRCOG, MClinPscychol, MFFP, DCH, PhD, GCSE looked up from his colouring book and gestured for me to be seated on the Chesterfield sofa opposite his desk. After 30 minutes or so he packed away his crayons and gave me his full attention.

‘Oh, I’m so sorry, I don’t appear to be relevant to this post; there seems to have been some sort of administrative cock-up.’ He said, rummaging through my medical notes, ‘Oh… hang on a moment…. there is this… it was delivered last week… it’s a meme from some chap called Mr Device, he’s requesting answers to some devilishly difficult questions in reference to your musical memories…. just relax and answer as truthfully as possible…. no need to answer with proper sentences or complicated grammar… just say the first thing that comes into your head.’

I leant back in the sofa, closed my eyes, and prepared myself for unconscious waffle. I heard Dr Mutterfort unscrewing his hip flask before asking, ‘What does music mean to you?‘

I frowned and concentrated hard. ‘Music can be a better representation of emotion than words… music reaches further than the mind.’

‘Is that all you’ve got to say?’ Asked Dr Mutterfort.

‘Yes, let’s not get too soppy…or philosophical.’

I heard Dr Mutterfort polishing his golf clubs, eating a blueberry muffin from M&S, and ironing a shirt. He was obviously thinking about Freud, but was desperate not to show it.

‘WHAT IS YOUR FIRST MUSIC RELATED MEMORY?’ Shouted Dr Mutterfort in my left ear, taking me completely by surprise.

…my mum had a portable record player, which was the size of a small suitcase. The speakers made up the lid and were detachable. It was possible to stack several records on the turntable so that when one had finished there was another ready to drop down to be played. I used to spend hours sitting on the sofa eating Opal Fruits whilst listening to records, Arthur Askey was a favourite along with Peter and the Wolf, Lady and the Tramp, and The Jungle Book.’

There was a long silence and I pondered whether Dr M had left the room.

‘So sorry, my child, I had cottonwool stuffed in my ears, shall we move on swiftly to the next question….What was the first album you ever purchased yourself?‘

‘Do I have to say???? Really????? Do I have to??? Okay, well seeing as you asked it was David Essex. I bought it with my birthday money. To be fair I didn’t really like David Essex but my older sister did, and I bought it in an effort to appear grown up. I was 9. The track called ‘Window’ scared the living daylights out of me so as soon as ‘Gonna Make You a Star’ had finished I’d run to the record player and lift the needle to skip it….

….I think it must have been all the screaming at the end that chilled me and I….”

‘Yes, yes, yes… I think we get the idea, can we move on… what is the latest music you purchased?‘

‘One Strike by All Saints….’

I could hear Dr Mutterfort bopping around the consulting room. It was obvious that he was liking All Saints. Sounding out of breath he flopped back in the seat behind his desk before asking me the final question, ‘What is he very last song you listened to before writing this post?‘

‘Cake by the Ocean by DNCE…. it’s difficult not to hear this at the moment because it’s officially played on the radio after every ten minutes….

….and it features cake, so what’s not to love?’

I could hear Dr Mutterfort’s eyebrows creak as he raised them, ‘I don’t think it means actual cake.’ He replied.

I sighed, read through the post I’d just written, and wondered what Arthur Askey would have made of DNCE.

If anyone would like to do this Meme then please feel free to do so. Ay-Thang-Yaw.