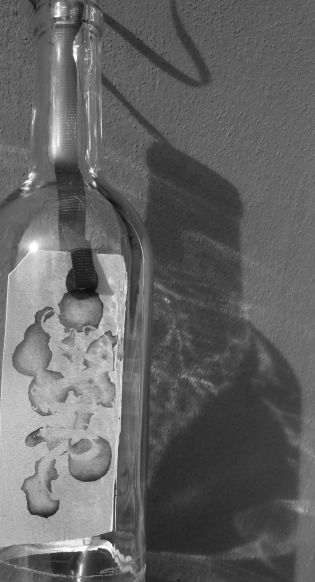 During my absence it appeared that some members of the Mogwash community had wholeheartedly embraced the ideas of contemporary art. For example, Mrs Fitzpatrick, who lived on the fringe of the village in the six bed-roomed neo-Georgian barn conversion known as Rose Cottage, had obviously benefited from our little chats because she had casually assembled and installed a startling piece of sculpture on her block-paved driveway. As a trained artist, with trained artist skills, I could comprehend and appreciate her efforts on a much deeper level, efforts that to the uneducated eye may have been mistaken for the unwanted contents of a dilapidated shed in a skip. With my artist’s eye I could appreciate the exquisite juxtaposition of gold lame evening gown and broken pitch fork as being a subtle metaphor for a society in crisis, emphatically highlighting the intrinsic cruelty of cultural disinclination and disintegration.

I was envious and slightly in awe of her talent, she had even gone as far as to cleverly leave her art piece unmanned so that any passing artist could redefine her vision by adding or subtracting objects, meaning that the piece was continually in a state of flux, forever evolving . . . The addition of a moldy mattress brought a whole new perspective to the project . . . it was enthralling to witness this mutating masterpiece. I contributed in a minor way by donating a bottle of air.

I had to accept that times were changing and I was no longer the only eccentric artist in the village . . .

We hold these truths to be self-evident, that all men are created equal, that they are endowed by their Creator with certain unalienable rights, that among these are life, liberty and the pursuit of happiness.
American Declaration of Independence, 1776 – originally drafted by Jefferson

“She was deeply hurt that nobody believed in the existence of Bottled Greed. I was with her when she buried it. It does exist.”

“She often used to walk up to the disused outdoor swimming pool close to where she lived. I told her not to go there. It was a ghostly, lonely place. She said it was haunted and that somebody had died there.”

“Her website and blog were influenced by her favourite authors and artists. She wanted to have everything she liked in one place.”

“As a child she was obsessed by a TV game show called 321, which was presented by Ted Rogers and Dusty Bin.”

“I felt that she was very introverted, reclusive even. She was much more sensitive than people believed. She liked to construct an opposite impression.”

“It was sad. She couldn’t quite determine fact from fiction and used to get in a muddle.”

“She was a slightly crazed misfit with a bottle fixation.”

“She always knew exactly what she was doing. She was exceptionally honest. I didn’t really like her very much.”

Sebastian sat back in his chair and frowned as he read the latest email from Rupert Etherington-Smythe regarding important changes to the Mogwash pantomime script. He believed he had followed Rupert’s original instructions as best he could – the story revolved around a series of clues that would guide the hero to a long lost fortune and, he had set the action in the Australian outback so that the mountain of corks that had recently clogged up the recycling centre in the car park could be used in some sort of meaningful way and, so that Rupert’s cousin, Kate, could showcase her professional technique on the didgeridoo. Rupert had stressed that there was no point in the villagers having 24hr access to a didgeridoo if nobody was prepared to use it.
Sebastian twitched and reached for his whiskey; he had spent all of the summer simmering over the story line, steaming up the scenes, and boiling the plot, in an effort to produce a script worthy of production on the Mogwash stage; with his creative juices wrung dry, he had presented Rupert with his final draft: ‘Walkabout’ – A Constructive Critique of Australian Social Identity 1918 – 1945.
It appeared that Rupert had been less than impressed with his efforts and was particularly perturbed regarding a gratuitously violent scene depicting the leading lady being hit over the head with a stray Campari bottle, leaving her to wander in an aimless fashion through flimsy stage sets as though she was an extra in a popular soap opera, before dying ungraciously in a heap. Rupert believed that the leading lady should linger longer that Act I, scene II… and she should at least exist to the very end of the pantomime… it was fine to tinker with traditional narrative structure, but screwing it up completely and then stamping on it was probably a tinker too far for the villagers of Mogwash.
Sebastian gulped the dregs of his whiskey, hunched over his keyboard, and began his edits. 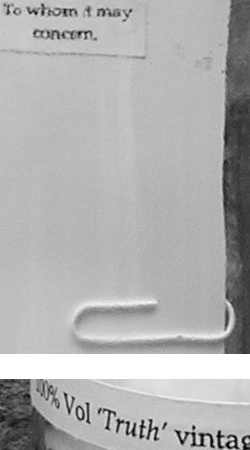 Occasionally, outsiders or people I knew from a previous existence, would attempt to make contact with me. Some would even go so far as to leave the security of street lamps, pavements – the rudiments of civilisation – to visit me in the dark depths of my rural enclave.

One morning I was awoken by a despairing voice on the telephone, pleading for directions.

Much to my amusement my caller was cut short by the infamous Mogwashian dampening field that sucks the signal from every passing mobile phone. I could only conclude that my friend was indeed very lost, but at the same time very close, and even with concise directions, a map, compass, and a book of quotations, it would always be impossible for anyone to locate me, let alone the bottle of greed.

“Do not do unto others as you would they should do unto you. Their tastes may not be the same”