Iwoke this morning with a heavy head, remembering that at some point in the distant past I had made a well intentioned, over enthusiastic, yet irrational declaration of intent – apparently I had promised to publish a post every Wednesday on my Wonky Words blog. How had this happened? I sighed and dragged myself out of bed, what the hell was I going to write about? There was Charmaine, of course, and her inky dabblings with italic calligraphy, and I could make mention of Harold, the Spanish flamenco dancer who was also locked in my attic fiddling with his self styled pointed nib….

On Tuesday evening before last Sunday, Harold and I argued ferociously, in an equally determined fashion, with regard to his refusal to learn any broad pen lettering. He believed a copperplate style would befit his passion for all things flamboyant and flouncy. In the end I let him have his way as I wanted to watch Eastenders and Holby City, but I refused to give him access to my extensive supply of pointed nibs and I made a note not to give him a bowl with his gruel the following morning, I also considered withholding the spoon.

So anyway, here we are, it is Wednesday and I am posting Charmaine’s first attempts at italic, and Harold’s first calligraphic marks with a pointed piece of wire that he picked out from an old electricity cable, which he found protruding from the attic wall. 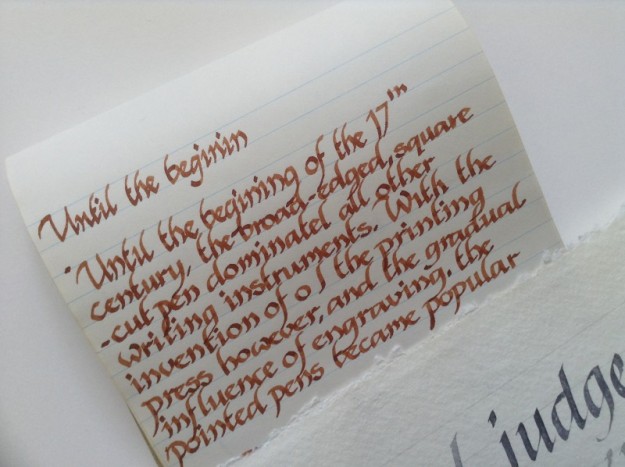 Charmaine, bless her, is learning some lettering history as she practices, which I think is a rather noble endeavour, although I doubt very much that she will remember anything worthwhile – she may be a sphinx like beauty but she has the memory of a fish. Harold, on the other hand, being the artistic sensitive type, is writing any old random phrase that pops into his head, and claims to prefer using an expressive stream of consciousness for his practice material… personally, I think he is spending far too much time staring at Charmaine’s chest.